GET INVOLVED, AND PARTNER WITH VIBRANT PERFORMANCE

Do you want to join the Vibrant Performance family by supporting our company and products? In order to join our team, you need to be a committed partner by sharing the experience in using our high-quality products with your peers, your social media followers, and at any of the racing and show car events that you plan to attend throughout the calendar year. We look forward to your support, and to having you join our family.

At Vibrant Performance, we are inspired by exciting, and intriguing projects that are built each year for all of the racing and show circuits that exist within our industry. We strongly believe the future of our industry exists within our fans, builders, racers and the next generation of young dreamers that will continue to keep it going for the future.

To apply for a sponsorship with Vibrant Performance, please click the link below and fill our application. Sponsorships will be evaluated on a case by case basis and we will be in contact with a sponsorship offer based on your level of project, and promotional reach.

Our sponsorship window is OPEN all year long, though sponsorship periods run for the calendar year. 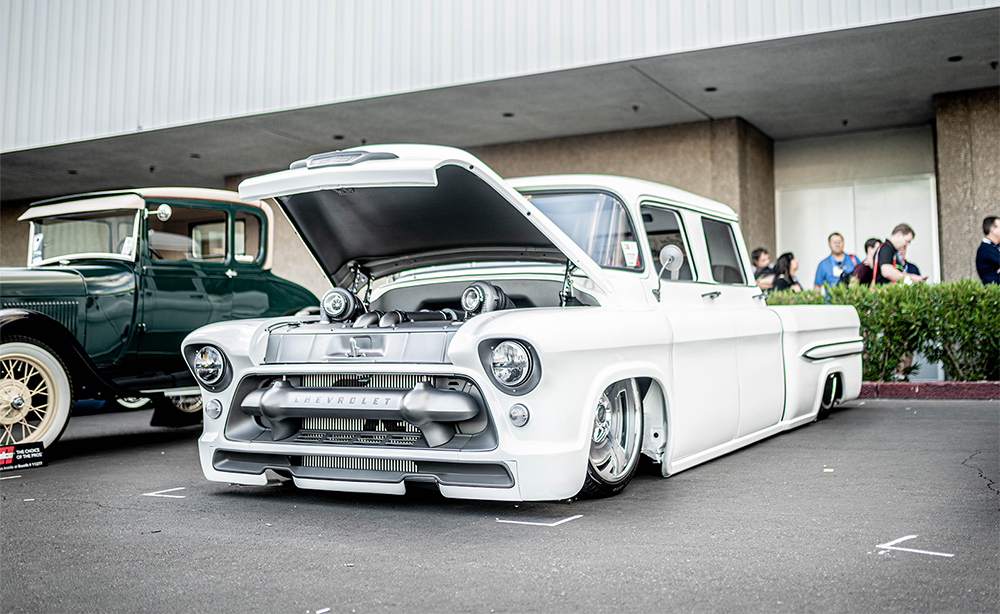 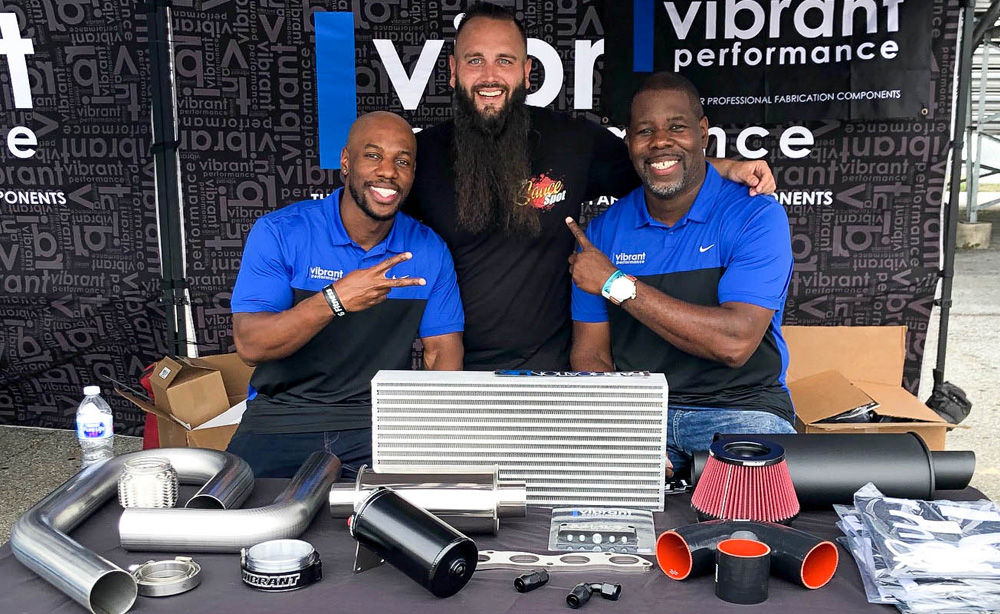 If you are hosting a show, Vibrant Performance is a strong believer in supporting the grassroot local shows with items that include stickers, posters, banners, swag and more.

Fill out the application in the link below to submit. Due to logistical demands, all applications need to be provided at minimum 5 weeks in advance to ensure the items agreed upon can arrive in time for your event.

William Au-Yeung is a leader, and leadership qualities are what we gravitate towards at Vibrant Performance when deciding to work closely with key sponsored partners. Based in Waterloo, Ontario (approximately 100 kms south west of the Toronto, Ontario core), “Will” as his friends call him, runs a successful performance shop named PZ Tuning. For many years, Will has been a devout customer of the Vibrant Performance brand, as our products have empowered him to build some of the best built cars all throughout Waterloo and Toronto. Naturally, Will’s ascension in the fabrication game lead him to begin his racing career in 2003, where he competed in both Street and Unlimited classes all throughout Ontario, Canada. Despite some roadblocks early, the incremental success and shear determination to be the best at his craft is what caught our eye, and in 2014, we inked our first major sponsorship deal with Will and his team on an Acura RSX.

Shortly after becoming a key sponsor on the RSX, Will was the first Canadian Time Attack car to set an American Record at GTA Road Atlanta; and subsequently, performed brilliantly for the next 2 years. In 2016, we decided to continue our partnership with Will on a new chassis platform for the unlimited class, a 2012 Honda Civic Si. A large mix of Vibrant products like our HD Clamps, V-Band and turbo flanges, fittings and hose components, along with a vast array of our stainless and aluminum items assisted in the propulsion of Will and the future success that would be seen in the new Vibrant Performance Honda Civic.

The immense success of Will and his team is the epitome of what being a top-level brand ambassador is all about, and is why we have and will continue to support Will and his team of overachievers. The Vibrant Honda Civic is retired, and a new one is coming – and we can’t be any more excited for the future. 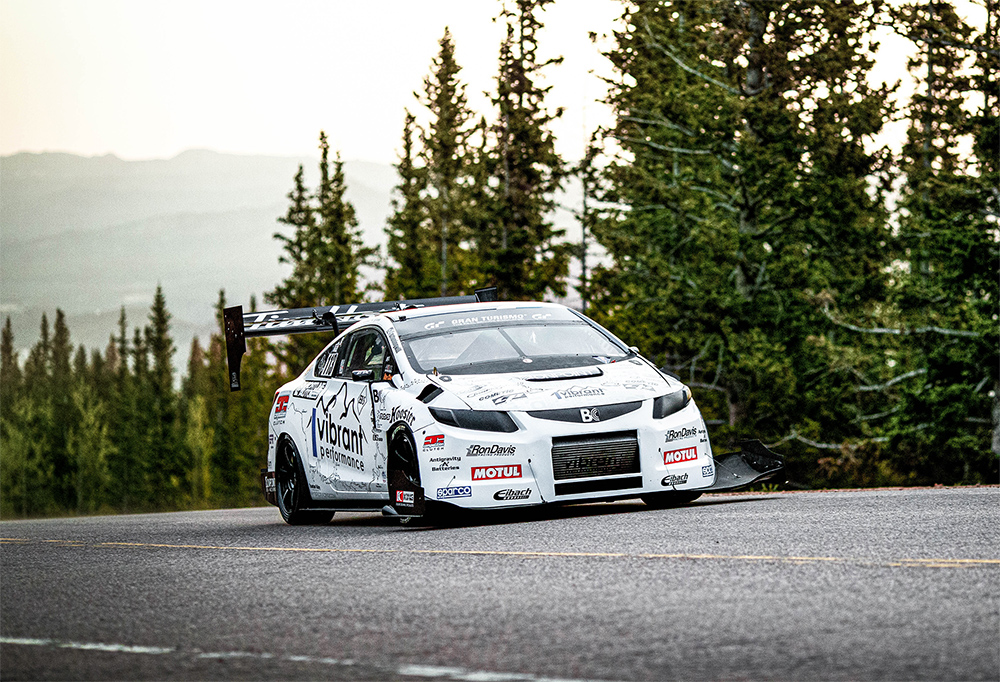 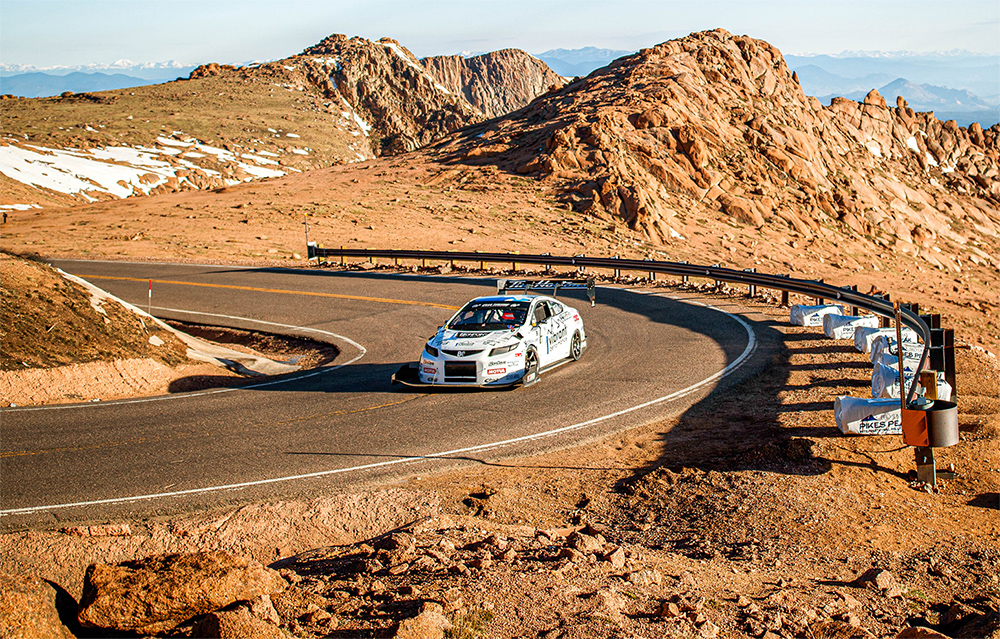 Jason Schmuck is a customer, and the type of customer that deserves all the accolades of the prototypical partner and supporter. In 2014, Jason started his business from humble beginnings by making his name in the Honda world with his incredibly designed S2000 manifolds. This initial step into the world of high-level performance and fabrication then led him further into the realm of extravagantly designed turbo kits for the Honda S2000 platform.

With manifolds and turbo kits as the catalyst to his growing business, and an imminent the need to further promote the business, Jason and Vibrant teamed up in 2017 on his Red Honda S2000 shop car, which was equipped with a V6 J32 Engine from an Acura CL Type-S. The potential of this platform was distinctive, and as such, the plan was set forward to transform the platform from a basic shop car to a mega race / show car hybrid. Prior to the cars’ debut at the PRI Show in 2017, the first step was colour, and in conjunction with Vibrant and Tim Minsker, Jason resprayed the S2000 to BMW Blue Tonic Blue (to pay homage to the Vibrant colours); and then subsequently, decided that the build would be the perfect stage to showcase the full breath of Vibrant fabrication components. From the intercooler plumbing and an exhaust system built using Vibrant titanium, to our Vibrant Performance HD clamps, flanges and a special mix of Vibrant fittings and hoses, Jason’s Honda S2000 became the shining star in our lineup of key sponsored partners.

Jason has presented a stunning display of fabrication talent at his business and on his Honda S2000, which solidifies him as one of the top fabricators in the country. His decision to choose Vibrant as his key fabrication source for all of his artisan desires is a tremendous privilege, and we look forward our continued support of all him and his business. 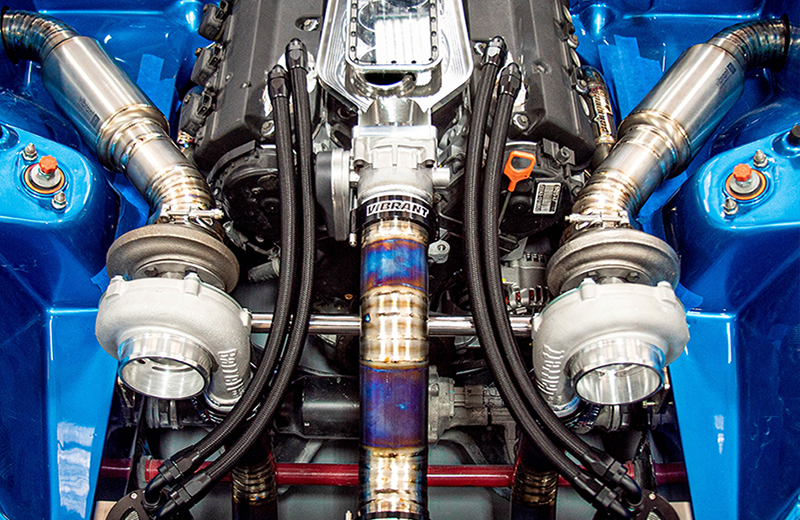 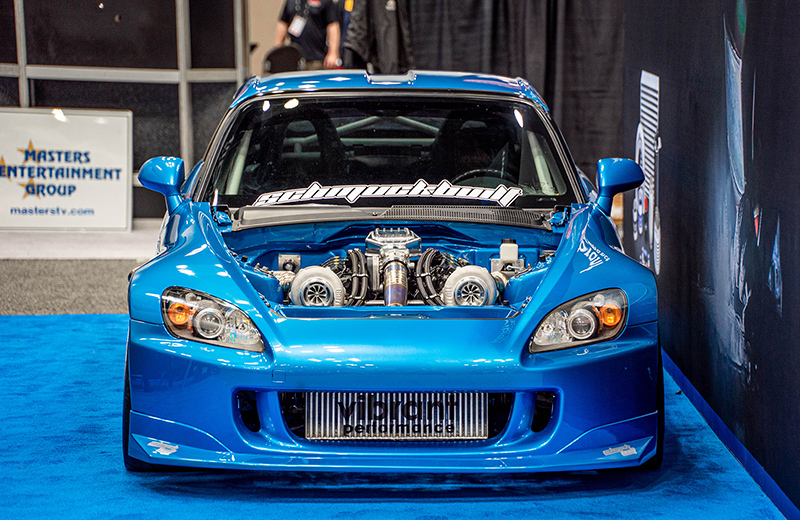 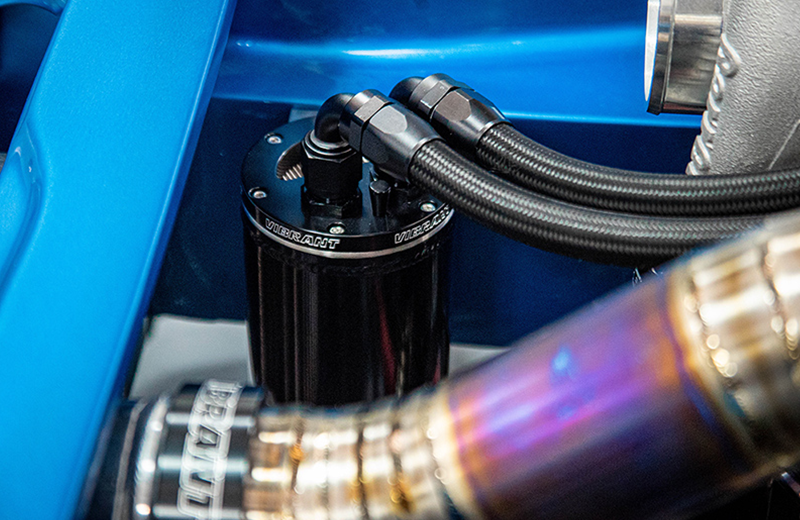 Riley Stair is a car builder extraordinaire, and his excellence at transforming unseemly useless and abandoned car shells into internet breaking, SEMA Show gems is why he is a trusted Vibrant sponsored partner.

Riley Stair’s story is the story of an underdog – an underdog that doesn’t come from the latest internet crazed fabrication shop, or the latest builder from overseas with a seemingly endless budget; but rather, from the humble beginnings of his father’s garage natured shop in Sacramento, California. At Vibrant Performance, it is these types of stories that we search for when making our decision to work with a sponsored partner and Riley’s talent fits the bill in every aspect.

In 2018, it was no mistake that when we became aware of an upcoming ’70 Trans Am build out of Sacramento, California and the incredible early teaser photographs, that we found a can’t miss winner that would occupy the space we had available in our 2018 SEMA Show booth. The most stunning aspect of the early photographs was the uncanny use of our stainless-steel items to build the most impressive complex header we have every seen – an equal length 8-1 header design using a mix of modified Vibrant Performance collectors, 2.25” bends to develop the primaries, all of which that hung beautifully off of a mega 400- cubic LSX Dart iron block. This culmination of brilliance coined the design as “the medusa bundle of snakes.” The SEMA Show stunner was also plumed with our Vibrant Stainless Braided AN Hose, a specially curated mix of our fittings, and our HD Clamp used in a fashion that was never seen before. The use of our products in this fashion was a homerun, as Riley’s ’70 Trans Am fully epitomizes the outcome of what can happen when supreme imagination meets, supreme talent – Riley broke the mold.

The results were unmistakable. Riley’s car at the 2018 SEMA Show went viral, and our trust in the build paid off in spades as Riley’s car was coined as the benchmark that many would look to as their aspirational measure of true build excellence. From a rusty, tattered and abandoned shell of a car, to a SEMA Show stunner is what it is about – and is why we have fully recognized Riley as one of the best, and highly touted sponsored partners. 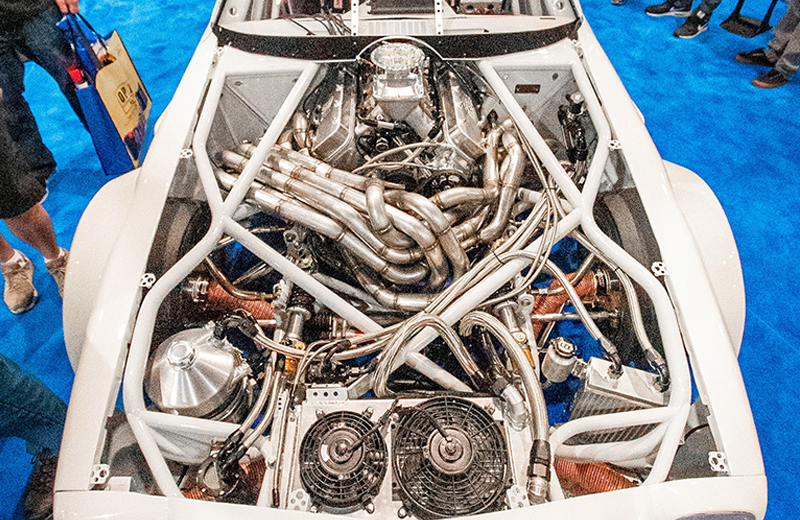 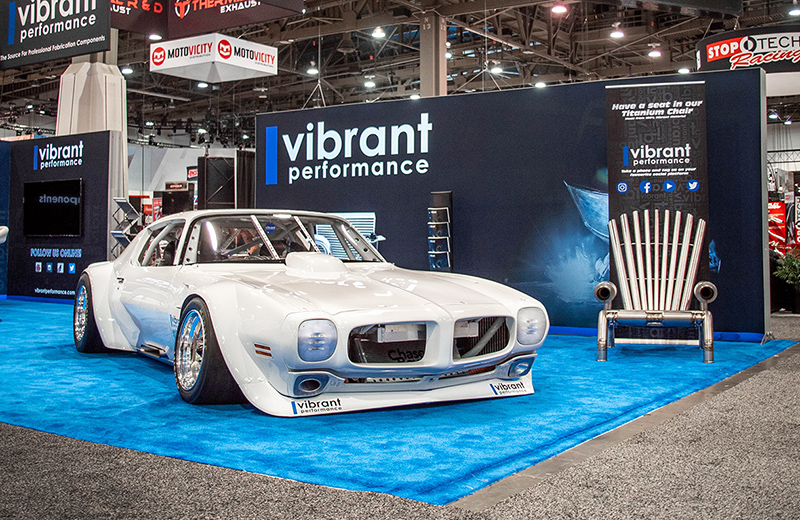 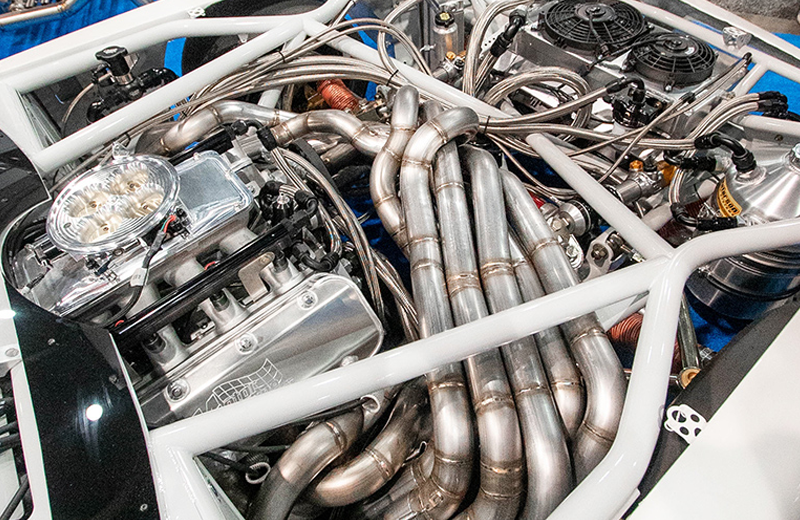 Hailing from Upminster, Essex, United Kingdom Steve “Baggsy” Biagioni is a world-renowned professional Drift Driver who lives and breathes Motorsports. Baggsy was born into a Motorsports family and spent his formative years fixing Karts in the British Championship with his father. With this upbringing, its no surprise that Baggsy has been in the drivers’ seat since he could reach the pedals, or that he began mastering his craft of racing through both Karting and Motocross at a young age. Baggsy’s early start to his career has led him to achieve success in every series he has competed in; including a win at the notorious British Drift Championship, which has solidified him as one of the strongest prospects in drifting to ever originate from the UK.

Vibrant Performance began working with Baggsy in 2015, when we sponsored his LS3 powered S13 with Exhaust and V-Band Components. This car was then featured in the 2016 Grand Tour final episode- where Baggsy taught Top Gear’s Richard Hammond how to drift using the LS3 powered S13 at the renowned and top secret Ladoux Test Centre in France.

In 2017, Vibrant Performance continued the partnership with Baggsy on the build of his next car- the Turbo LS Powered GTR. Baggsy built this car in partnership with Chris Jeanneret. Baggsy followed up the success of this build by launching the “Driftenberg Project” in 2018, which saw him infiltrate a sleepy German town with his drift car; stamping his signature via tire marks across the town. The success of the “Driftenberg Project” was followed in 2019 when Baggsy revisited the sleepy German town for “Driftenberg, The Return”, which amassed a staggering 4.8 million views on YouTube.

In 2020, Baggsy announced his next build – a 1000hp Nissan Navara complete with a GTR drivetrain. Vibrant Performance is proud to be continuing our partnership by supplying all Intake, Exhaust, Fuel Delivery and Turbo Fabrication components for this build. 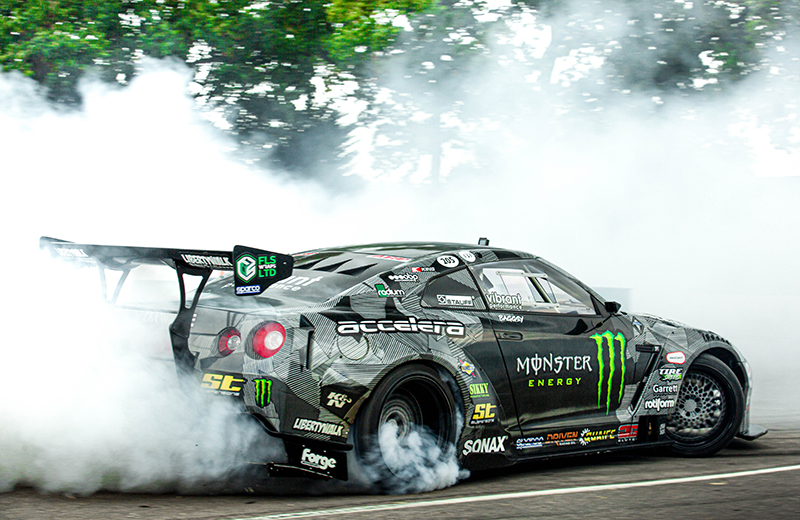 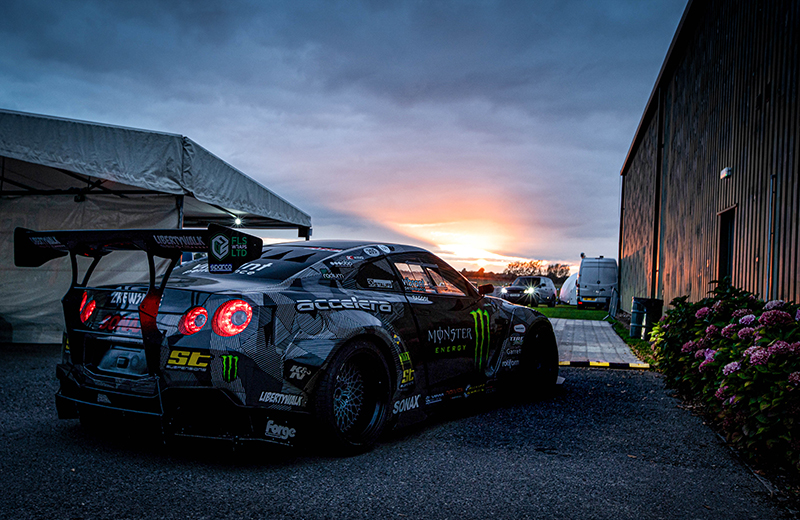 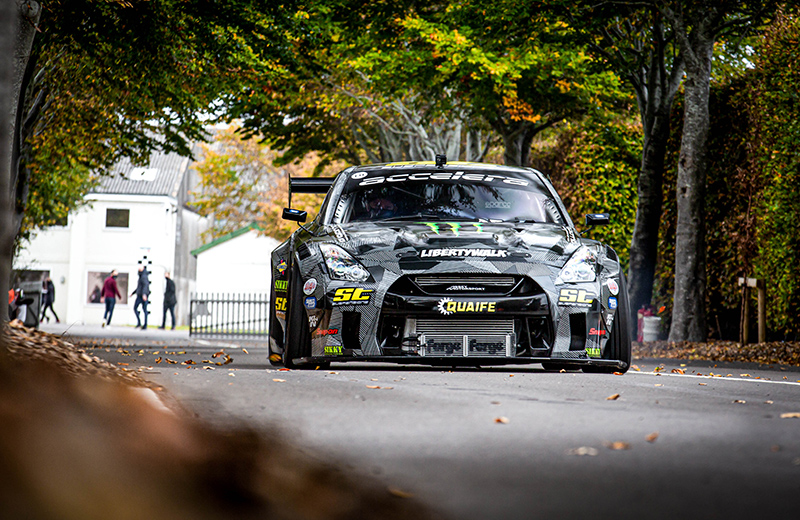